In between the movements looks at the networking that is taking place between local & global justice movement groups. The project investigates corresponding practices and their influence on theory.

Interviews were conducted on various subject areas. ‘No Border No Nation’ and ‘§129a’ looks at the criminalization of left-wing movements in the course of the anti-G8 demonstrations in Genoa 2001 and Heiligendamm 2007. The situation of the residents near a G8 summit is topic of ‘NOG8’. ‘Transplanted’ talks about the lack of a genuine civil society in Albania. ‘Queer’ shows the necessity of Queer Politics and anti-discriminatory demands. ‘Transversal’ is a little stroll through a socio-cultural center in a search for transversal lines that always cross through new movements and institutions.

“Snip…Snip…Bang, Bang: Political Art Reloaded”, created with Gregory Sholette in New York, thematizes the uneven distribution politics in the art system by means of the comparison of invisible art- and culture work with the phenomenon “Dark Matter” in astrophysics. The history of political art actions in New York City in the 1980s and 1990s presented by Sholette in the video and their influences on current activist and artistic practices shows in addition, possibilities of action outside of the art market.

„Medinat Weimar & Global Justice Movements“ was shot in 2009 together with Ronen Eidelman in Holon near Tel Aviv. It thematizes the special situation of Israelian activists within the movement of globalisation and the role, which can be ascribed to Israelian artists in post-nazi countries. The paternalistic attitude, which may be taken in this process by public German institutions, is shown by the censorship of Eidelman’s art project at the Bauhaus University in Weimar. Thus, the establishment of an office “Medinat Weimar” (a movement for a Jewish state in Gemany) on the university premises was prohibited, and this with the argument to protect him from the neonazi-attacks.

The scheduled demolition of a small agricultural village to make way for the new rail line from Hong Kong to mainland China in 2010 is the topic of “Choi Yuen Village”. The film shows several forms of resistance in and outside the village.

“Save Union Square” is based on interviews in 2008 and 2009 with activists from groups like “Church of Stop Shopping”, “Nyc Park Advocates” or “Billionaires for Bush” who fight against the privatization of the pavilion at Union Square New York. A very different approach is discussed in “pure products usa”. It’s about a company that manufactures since more than 16 years a series of multiple edition sculptures that play with the role of politics in an age of marketing and consumerism.

The latest film is about “Erased People” in Slovenia. In 1992, the newly independent Republic of Slovenia erased from the register of permanent residence 25,671 inhabitants that until then had enjoyed full citizenship rights. It starts with an interview Krenn did in 2003 with the researchers and activists Jasminka Dedic and Jelka Zorn. Seven Years later Krenn continues this conversation with Jelka Zorn and Irfan Beširević, who is an political activist and spokesman of the “Erased“.

Each video as well as its poster is developed in close collaboration with activists from different geographical and cultural contexts giving insights into various perspectives of resistance. 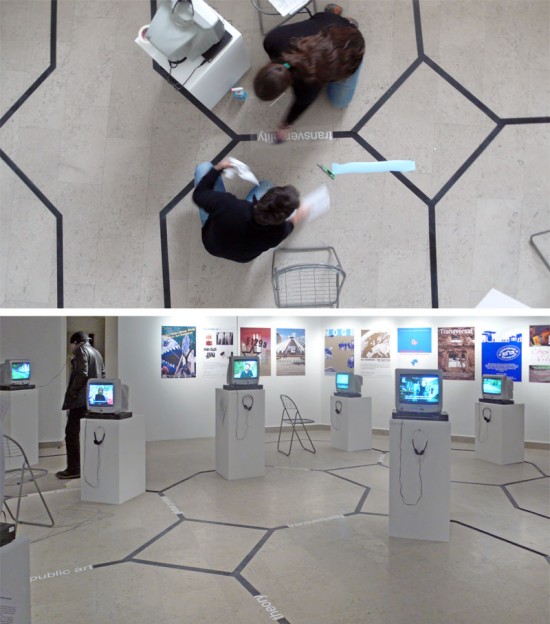