Statt Rassismus (Instead of Racism) is a project by Martin Krenn conceived for communicate! / TKI open 10. It was developed in cooperation with the Institute of Pedagogy of the University of Innsbruck (Dr. Claus Melter and Selda Sevgi).

Location: Container installation in the front of the Landesmuseum Ferdinandeum, Museumsstrasse 15, Innsbruck, Austria
2:00 pm to 7:00 pm

The five-day project in public space that uses an electoral campaign as a „Trojan Horse“ vehicle to thwart the logic of conventional election campaigns. The project’s aim is not to campaign for a certain party, but to request the passersby to actively adopt party for anti-racism and solitary politics. The concept of active participation in political processes is set against a passive understanding of politics.

In short, it is not a new city government that stands for election. What is at choice is rather to take a stand for a just Innsbruck. This includes taking up position against excluding legislation, hate campaigns of political parties as well as access limitations, racist insults and attacks against immigrants in everyday life. 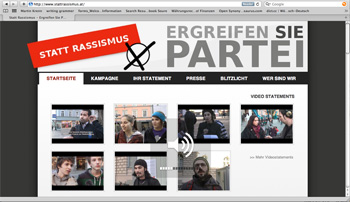 The project team creates different participatory settings for the city dwellers, for instance a video portal, a website, a speaking corner with a LED marquee on site.

Inside the election campaign’s container, sheltered from the street noise, people are invited to discuss with the project team, e.g. about slogans of election campaigns, anti-racist demands, definitions of racism.