Aarhus, 2004
In cooperation with Oliver Ressler

Martin Krenn & Oliver Ressler realized a work on racism for „Minority Report: Challenging Intolerance in Contemporary Denmark“. One version of this work was presented on a 4 x 4 m large banner on the facade of The Equestrian Hall in Aarhus, Denmark, where a part of the exhibition took place. During the night of September 24-25, 2004 – one day before the opening of Minority Report – it was taken off and stolen by an unknown person/group. This incident was reported to the police and an investigation started.

The second version of this work on racism by Martin Krenn & Oliver Ressler was produced as a poster that was meant to be displayed in 90 city light boxes in the city of Aarhus during the week of October 18-24. The billboard company AFA JCDecaux initially rejected to present the billboards to the public. Claiming that it was not possible to present a work which uses the logo with the 12 stars of the European Union. A very week excuse, as these stars cover only a small percentage of the billboard. There definitely was a copy right violation, but to use existing graphic material and realize something new with it is a very common artistic strategy. It was obvious that the company and Aarhus Municipality did not want to present the billboards in their city light boxes because of its political content. The curatorial team of Minority Report and the artists subsequently negotiated with the billboard company and Aarhus Municipality to have the posters displayed to make them available to a larger audience.

The artists stated: „It is a shame that the city of Aarhus rejects to make our billboards available to the public in their 90 city lightboxes, although they agreed to do so at an earlier stage. The theft of our banner before the opening of Minority Report and the reaction of Aarhus Municipality to censor our anti-racist art work seem to be linked to the political situation in Denmark. The existing dominant image of the right-wing politics of exclusion in Denmark unfortunately has been confirmed through this action.“ (17.10.04) 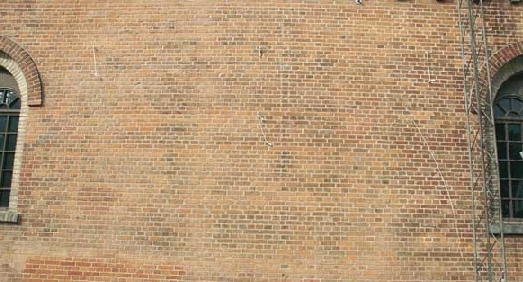 The text on the banner and billboard posters read:

The ruling principle of capitalism legitimizes itself by means of two contrary ideologies: on the one hand the universalistic claim of the competitive society and on the other hand racism and sexism. Capitalism’s non-redeemable promise of equality is in need of ideologies of inequality like racism. Racism makes legitimate the existing relations of inequality in capitalism and thereby contributes to its reproduction. Anti-racist practice should therefore always also aim at the demontage of the capitalist system. 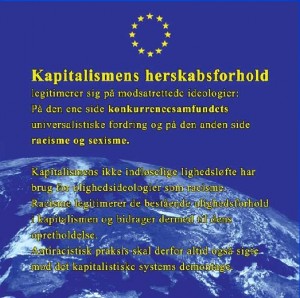 Draft of Poster against racism by Martin Krenn & Oliver Ressler

Finally, the posters against racism in EUrope could not be censored.
The Posters had to be installed by the company in 90 light boxes throughout downtown Aarhus until October 24, 2004. This was possible after pressure by media like TV Denmark, radio stations  and newspapers and an artistic modification. Krenn/Ressler covered three stars of the EU Logo on the poster and thereby underminded the very weak excuse to censor the work because of a „copy  right violation. 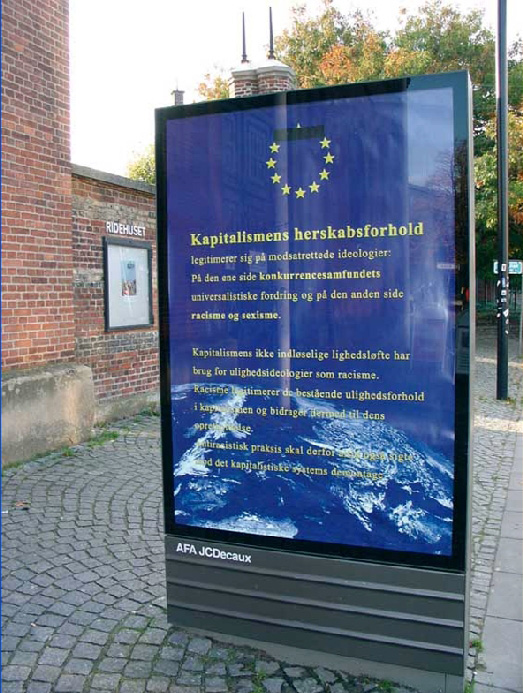 Final version of the Poster, which could not be censored anymore.