Legitimacy in appearance: Robbery without Restitution 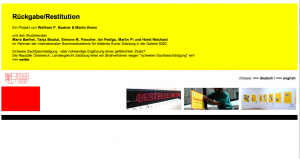 After Austria’s “Anschluss” with the NS-system in 1938, Jewish citizens were excluded from the public legal system. The first arrests of Jews were followed by a temporary official management of Jewish property usually resulting in expropriation.

These actions were legally sanctioned by specially declared laws favouring “Aryan” citizens. The Nazi term “Arisierung” is nothing else than a synonym for nationally sanctioned robbery. It gave many the chance to claim the property of their Jewish neighbours for themselves. Houses, furniture, jewellery, books and other personal possessions were either stolen or acquired at ridiculously low prices from the persecuted Jews by Aryan citizens.

The existing “Arisierungsakten” give detailed account of the names of the “Arisierer” who took possession of Jewish property, the particular items, real estate and the outrageously low prices of purchase. Even the relatively small proceeds were taken from the original Jewish proprietors through special fees such as the “Entjudungsabgabe” and the “Reichsfluchtsteuer”.

After 1945, private and public restitution was made virtually impossible. Apart from very few exceptions, none of the stolen property was ever returned. Politicians, administrations and private profiteers did their utmost to conceal the facts and continously refused to pay any compensation.

How many households in Salzburg still hold such unlawful property?

The Intervention “Rueckgabe” aims to make this scandalous situation apparent to society.
The “Rueckgabestelle Salzburg” attempts to locate stolen property at certain places in the city of Salzburg. These properties are then marked in a simple and effective way and presented to the public.

The public identification of these properties is intended to inform about past occurrences and raise awareness, attempting to encourage discussion.
Today all political forces, public and legal authorities and private profiteers of this so-called “legal” robbery are called upon to return the stolen property to the rightful owners and their heirs.

The Rueckgabestelle Salzburg provides information on the matter and encourages discussion. Documents of refusals to return property are on display in the gallery.

Supplement of a quotation of Theodor Herzl’s diary