a project on borders, migration and border crossing services 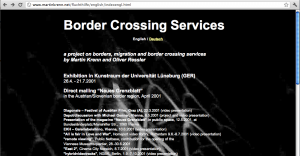 Due to the European Union member states’ restrictive immigration regulations there is almost no chance to legally migrate to the EU and reside in a member state. For those who want to enter, making use of border crossing services is often the only possibility for penetrating “Fortress Europe.”

The goal of the project “Border Crossing Services” (“Dienstleistung: Fluchthilfe”) is to redefine, reinterpret and highlight the positive aspects of terms such as “smuggler” or “trafficker” which have been given a negative connotation owing to the dominant medial discourse. In contrast to the prevalent understanding, the actual act of “smuggling” is not characterised as criminal exploitation of asylum seekers. Instead, we highlight the service character of this business made necessary by European policies of exclusion.

Associated subjects such as borders, migration and escape were worked on in cooperation with anti-racist groups, migrant organizations and students at the University of Lüneburg.

The project “Border Crossing Services” was realized through a variety of media, such as a direct mailing and a video, which, together with additional measures of information, form an exhibition in the Kunstraum Lüneburg.

The project is based on a process-oriented approach. Throughout the course of the project, results from the different areas of research mutually influenced other aspects of the project. 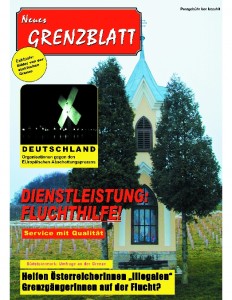 In cooperation with anti-racist groups and migrant organizations, the informational brochure “Neues Grenzblatt” was produced and distributed in April 2001 along the outer-borders in Styria (A) to 12,000 households through a direct-mailing. The layout had a “folksy” design to allow easier entry into a confrontation with the themes. The popular design featuring pictures of the region and headlines such as “Border Crossing – Quality Services” was meant to arouse the curiosity of the region’s inhabitants. The readers were confronted with anti-racist positions and perspectives which are marginalized in conservative media. The text contributions from the participating groups all employed a language which could theoretically also appeal to readers less familiar with such material. The informational brochure was furthermore distributed at various events (some held in public spaces) and in cooperation with leftist groups. The brochures were also available for free at the exhibition. 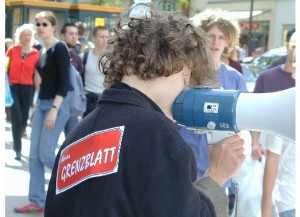 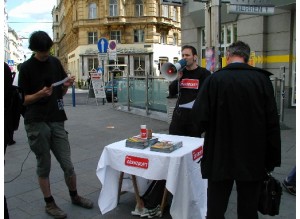 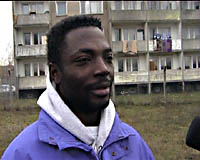 A video (DV, color, 51 min), forms a central element of the exhibition, and is also shown at thematically related events and alternative video festivals. It confronts the hegemonic model for representation of “border crossing services” and migration. Based on conversations carried out in Germany and Austria with immigrants and persons involved in the political left, the basic theme was separated into four sections for analysis and critique: “Who is allowed to migrate?,” “Celebrating and excluding”, “About border crossing services” and “Against racism.”

A representative of the activist group “Taxistas” describes how taxi drivers in Germany are criminalized as “smugglers” for transporting illegalized people. The section “Celebrating and excluding” is a “short report” about the latest war machinery for border security, eagerly presented by soldiers at a festival of the federal armed forces at the Heldenplatz in Vienna on the Austrian national holiday. In the section “About border crossing services”, a conversation with a leading border patrol officer in Frankfurt an der Oder, shows contradictory arguments which are used for trying to legitimize racist mechanisms of exclusion. The digital video premiered in March 2001 at the Diagonale, the Austrian film festival, in the framework of the events series “Politik bilden!” (“Form Politics!”). 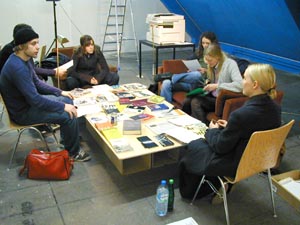 Starting from a block seminar which we carried out at the University of Lüneburg, participating students formed a self-organized project group. In order to counteract the hierarchical relations which can possibly develop between artists and students in their cooperative work, we decided to jointly present works which we co-produced, independently produced contributions of the project groups and our own exhibition contributions in a commonly created exhibition framework. 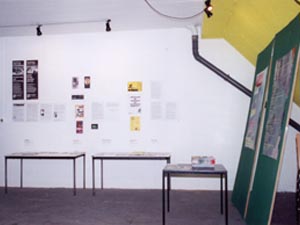 All of the exhibition contributions were discussed in work meetings held at various stages of development. Thus, critique could subsequently be integrated during later stages of the production process.

During a visit to Frankfurt an der Oder, research was carried out at the border. Elements of this research influenced a video produced by the students dealing with further facets of the issue of migration and border crossing services. Conversations between members of the project group, with students in Frankfurt an der Oder, with representatives of the migrant group “Kanak Attak” in Hamburg and with representatives of “Netzwerk gegen Rechts” in Lüneburg formed a pool of research which allowed insight into the local situations and reflected on the students’ approach to the subject. The resulting video, edited by the project group, was shown along with the video “Border Crossing Services” as a video projection during the exhibition.

Texts, direct-mailings and flyers shown in a wall installation, refer to the work of the groups who wrote articles for the “Neues Grenzblatt” and to other contacted groups.

Based on a seminar on racism led by Ulf Wuggenig at the University of Lüneburg held during this time, the project group chose quotes from the treated literature and discussed them with us. This was shown in an exhibit of text passages from the seminar literature, which, together with anti-racist magazines, form a theoretical framework for the individual elements of the exhibition.

The project was sponsored by Kunstraum of the University of Lüneburg and Verein Ökologie und Kunst, which supports the cooperation of art and science in the framework of cultural landscape research. 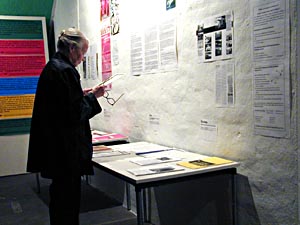