A contribution to the exhibition “Publi©Domain”, Third Austrian Triennial on Photography, Graz (A) 1999. In cooperation with Oliver Ressler.

The five montages of photographs and text which make up “War Zones” focus on wars that are fought with military, economic, political and propaganda weapons in order to consolidate and extend the power relationships of the capitalist world economic order. In this process, the existing ethnic and social boundaries, not only within national states and the supranational structures to which they belong, but also outside of them, are either secured or redrawn according to strategic, economic and military criteria.

Behind these photomontages is the conception of a “war of a new kind” which uses the discipline of political and military action within and outside the centres of capitalism to drive the hegemonic neo-liberal economic system ever onward. The term “disciplinary neoliberalism” (Stephen Gill) has been applied to this system.

What is specific and new about this “war of a new kind” is that it operates on two levels. On one level there is a military-technological apparatus of power, which exerts total control over the flow of all information as it moves in on the territory in question. On the other level there is a local operation within the territory, and its aim is to create nationalist and racist identities. As a result the power relationships within a society are militarized from two sides, whose mutual massacres provide cover (or cover-up), for each other (1).

These “wars of a new kind” succeed in imposing control over the manifold political and social relations within the territory and extend the capitalist sphere of influence. The wars, transformed into “police actions” or “humanitarian interventions”, are no longer characterized in the western world by total mobilisation but by a flexible combination of local concern and media staging on a global scale.

However, these “War Zones” do not merely represent theatres of military conflict but also certain places which are of importance in relation to the exercise and maintenance of geostrategic power. In many cases, the mere presence of the apparatus of military power is sufficient to ensure that control is exercised over the economy and people at the periphery. The reciprocal relationship of military and economic power, or rather the “military character of the global economy”, is mirrored at the personal level, as in the case, e.g. of Robert McNamara, the former U.S. Defence Secretary, who later became President of the World Bank.

Each of the five theatres of war considered in “War Zones” exemplifies a specific variant of warfare, which is illustrated by means of an image and commented on in a text. 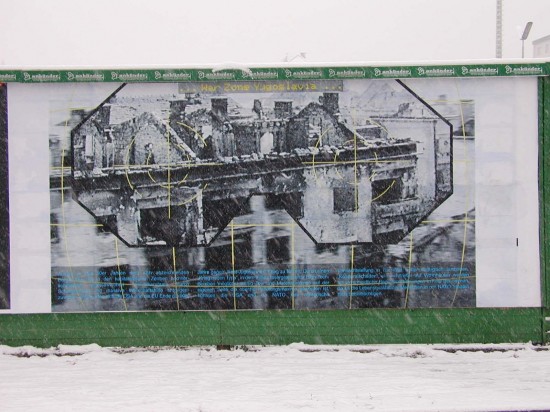 The texts, which are incorporated in the layout, give a condensed account of the various war zones and attempt to bring out the structural connections between them. The images, which show all characteristics of media products, are details of real life photographs, but are displayed within the frame of a bomb-sight which makes every territory on the entire globe appear a potential target. The whole thing thus shows the imperialist gaze targeting people and territories, and represents the currently used machinery and methods of controlling and disciplining the peripheral zones of the capitalist world by means of the apparatus of economic, military and technological power that has its home base in the centres of capitalism. 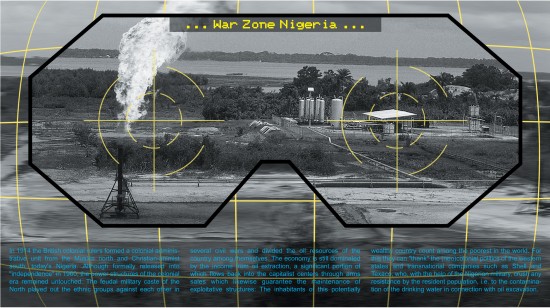 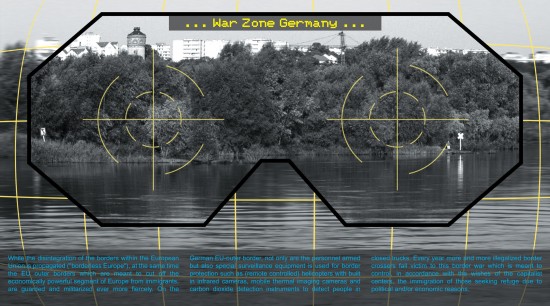 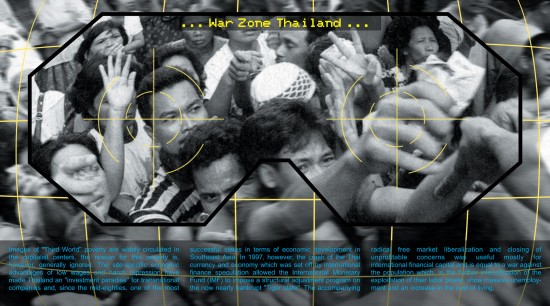 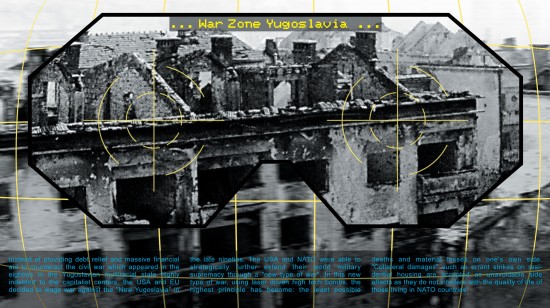