In Austria, the concept of homeland is implemented not only regionally but also on a supra-regional and state level. This is meant to facilitate and force the citizens’ emotional attachment to the state. This type of manipulation already takes place at school. “Learned Homeland”/”Gelernte Heimat” attempts to illustrate these “nativizing strategies” with Austrian school books, in which the construction of “homeland” is particularly vivid.
In the process of creating collective identities through the concept of homeland, the “own” is always valued against the “other” and in this way demarcated from it. The “own” history is glorified, or even falsified. “Natural beauty” is pulled in for symbolization and concretization of the “Austria homeland” and used to produce a sense of the citizens’ ties to the “homeland.”
Because of the early influence of state schools on pupils, equating Austria with homeland is deemed natural. This leads to a situation in which an obviously constructed sense of homeland is seen as a natural fundamental human necessity and is hardly ever questioned.

Two school book pages expanded with blocks of text and an announcement of the exhibition in the Neue Galerie animated observers to confront the construction of a homeland-concept using their own school experiences. Interviews with passers-by reading the texts on the posters were carried out and recorded on video. 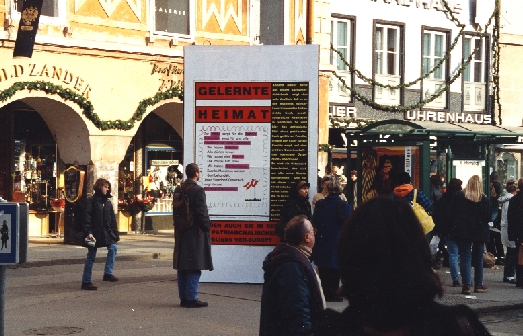 Exhibition in the Neue Galerie
In the first room of the exhibition, the video documentation of the reactions of those passing by and reading the posters was shown. On display in the next two rooms were twelve Bubblejet prints, which thematized further examples of homeland constitution found in the school textbooks.
Presented in the fourth room was the video “Learned Homeland – Working Talks”/”Gelernte Heimat – Arbeitsgespräche”. This video includes theorists from Austria and Germany who have published texts on racism and homeland.
Interviews were carried out with: Jost Müller, Nora Räthzel, Juliane Rebentisch, Mark Terkessidis, Vera Kockot, Herbert Nikitsch/Bernhard Tschofen and Walter Manoschek.
The conversations expand the content of the theme by pointing out the relationship between homeland and racism in Austria and Germany. 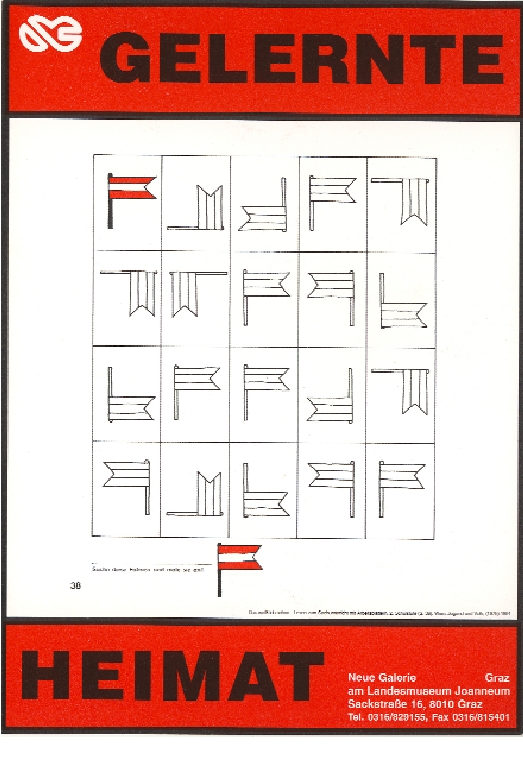