Update 1. May 2014: Eight years after our intervention the grave owner finally had to cover the swastika. 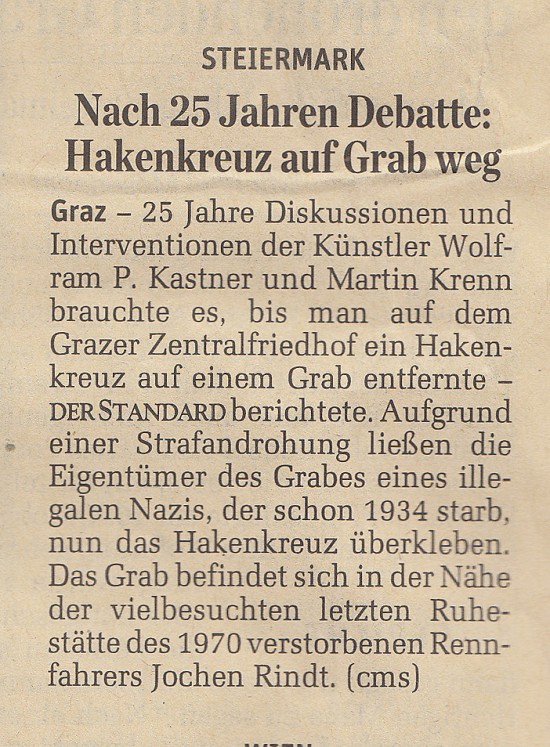 VIENNA (EJP)— A Nazi grave featuring a swastika and an inscription that pays homage to „SA Storm Unit Leader“ Tita Probst is causing controversy in Austria.

The inscription on the gravestone says: „He died in the fight for Greater Germany.“

Tita Probst was a member of the Nazi party when it was still illegal in Austria and a so-called brown-shirt. He was shot while part of the group that tried to take Austria in the putsch of 1934.

In 1938, during the Anschluss euphoria in Austria the grave was redesigned, the swastika and the inscription were added to the grave in Graz Central Cemetary and never removed.

A number of attempts to remove the controversial epitaph have always failed. In 1988, at former Graz city council Ernst Kaltenegger’s insistence, the swastika was pasted over, but unknown people chipped away the cement shortly afterwards.

And four years ago law historian, and vice dean of Graz University, Martin Polaschek called for the gravestone to be altered. He said: „This is a definite offence against the insignia law and probably against paragraph three of the Austrian Federal Law on the prohibition of National Socialist activities.“ 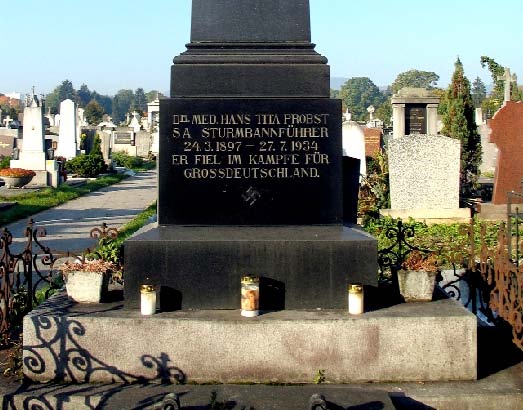 But neither the city of Graz nor the diocese nor the town’s parish, who administers the cemetery, did anything to change the illegal gravestone.

Heinrich Schnuderl, a representative of the Graz parish said: „I asked the owners of the grave years ago to do something against it, but they refused to do so. Legally there is nothing we can do.“
Two artists are now trying to get the case moving again by installing artwork at the site of the grave. They say that before they opened their installation they were threatened that there would be charges pressed against them if they went ahead with their plans.
But German Wolfram Kastner and Austrian Martin Krenn went ahead, saying: „The playing down of Nazi crime has to stop.“
The pair affixed a Plexiglas board in front of the gravestone telling the story of Tita Probst.

At the official unveiling of the board a relative of Tita Probst called the police and pressed charges against the two artists, saying they were guilty of the crime of grave desecration.

The artists responded by making an official complaint, saying the continued existence of the grave is a clear offence against the insignia law.

They said: „The argument that this is a private grave and therefore there is nothing to do about it is absurd, they have no right to publicly display a swastika. „The insignia law says that symbols of the Nazi time mustn’t be displaced in public.“

The pair say fault lies with either the city of Graz who own the cemetery or the Catholic church, who run it. 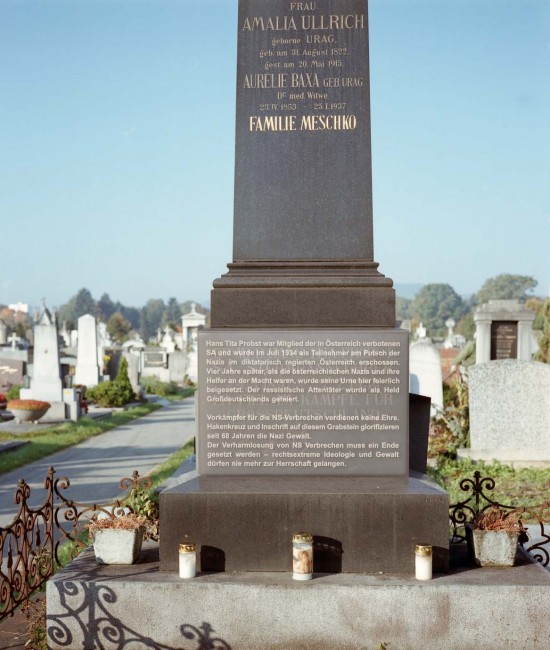