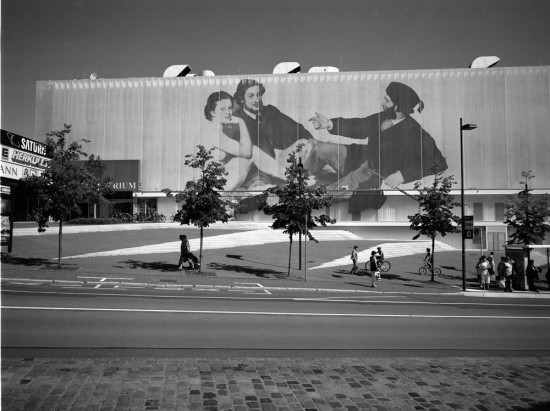 In his work “Memory in (Post-)Totalitarianism” Martin Krenn undertakes a photographic journey to different sites of history. Through monuments, archives, museums and memorials he follows the traces of evolution and change of historical images in totalitarian and post-totalitarian societies.
Krenn examines the role memorials, movies and historical novels can assume in the construction of collective and cultural memory. He consciously avoids to equate the crimes of a totalitarian communist past with those of fascism and nazism.
He researches their differences and correspondences and concentrates on the transmission of fascist history in communist and post-communist societies. Krenn is interested in the traces left by political ideologies in the following generation and the influence of a totalitarian past on the construction of new political environments.
Sites of history
Martin Krenn, in the course of his research, travels several times to Germany and Romania. He developes a questionnaire and interviews historians, museologists, history teachers, press spokesmen, writers, former political prisoners and Holocaust survivors. He visits official and unofficial memorials and focusses on their different strategies of design and transmission.
Central sites are the Revolution and Protest Square
(Piata Universitatii, Bucharest, RO), the Sighet Memorial (RO), The Paupersʼ Cemetery, Sighet (RO), the Central Archiv of Securitate (Bucharest), the base for a bust of Antonescu (Bucharest, RO) and the Holocaust Memorial in Bucharest (RO), the Buchenwald memorial (D), the Buchenwald monument/the group of figures by Fritz Cremer (Weimar, D) and the former Gauforum at Weimar (D).

In this context he puts the following questions:
Which role assumes the Piata Universitatii in Bucharest for the civil society today if, although the victory over communism is celebrated here, the commemoration of the brutal supression of student protests in the 1990s is still taboo?

Why was the rumanian Holocaust, which claimed over 400000 victims, officially denied until 2003, and how much can the Holocaust Memorial constructed by the Romanian state achieve in terms of active remembrance?

How did the GDR make use of the fate of Stefan Jerzy Zweig, held prisoner in Buchenwald when he was three years old, and why did he become the target of post-communist political reassessment of the past after the fall of the Berlin Wall?

A further video work refers to the former concentration camp at Ebensee in Austria. Here, Krenn takes a single photograph to describe the way images produce meaning and how mainstream media represent sites of remembrance and crime. Finally, the informations and images collected during these journeys result in a complex cartographical web the individual parts of which the artist order and interrelates on the basis of thematical and aesthetical criteria. 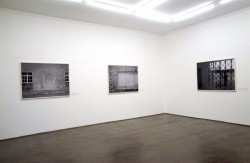 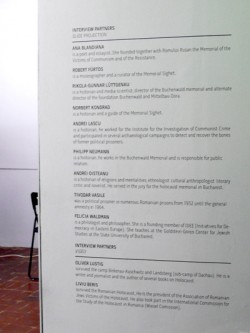 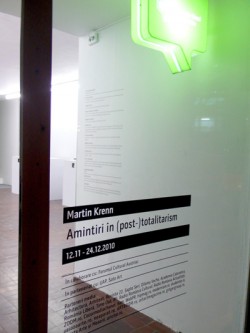 The focus rests on photographic works which are part of the three-band audio and slide installation “Memory in (Post-)Totalitarianism” as well. Krenn refers to different media. He analyses the historical images of the GDR about the concentration camp at Buchenwald as they are exemplified by film stills from the classic DEFA movie “Naked Among Wolves”. He moves through the Sighet Memorial in Romania in analogy to his first visit of the virtual museum Sighet which is documented down to the last detail on DVD.

The texts shown in the installation are based on interviews with experts. Large-formatted photographs provided with inscriptions on dibond-panels continue the reciprocity of images and texts which directs the viewer to find hidden or invisible informations inherent in the sites. The selection and sequence of photographs and texts in “Memory in (Post-)Totalitarianism” form a new narrative. This meta-narrativ takes into account both the artist’s procedure and his position as interviewer and observer and the complex political attitude of different regimes to the past. Video interviews with the journalist and author Oliver Lustig and the president of the Association of Romanian Jews Victims of the Holocaust, Liviu Beris, allow insights into the development of history politics in Romania from the viewpoint of Holocaust survivors.

Movie and novel: “Naked among wolves” l “Tears are not Enough”
Martin Krenn focusses especially on the role of the media in reevaluating and transmitting history. He uses the example of the novel “Naked among wolves” about the concentration camp at Buchenwald by Bruno Apitz. In the GDR, the book achieved the status of a documentary novel and is taught in schools as basic reading. In the homonymous movie by Frank Beyer, which was filmed in the former concentration amp at Buchenwald, survivors even play themselves a part. Book and movie contribute, through their apparent authenticity, contribute to create the myth of the self-liberation of Buchenwald by an illegal communist armed camp committee. The reevaluation of GDR history in post-communist Germany in the 1990s has then pushed these “Heroes of Buchenwald” into the background and defamed some of them – with complete injustice – as nazi collaborators.

The organisation and effort of the camp committee has saved the lives of thousands of prisoners. But Buchenwald was liberated by the American army. One of those who owed their lives to the communist prisoners is Stefan Jerzy Zweig who was three years old at the time and who is the avatar of the “Buchenwald child”, one of the main figures of the novel/movie “Naked among wolves”.

The novel describes Zweig’s fate imprecisely, among other things it is passed under silence that his father survived Buchenwald together with him. The true story of Zweig and his father is told in the autobiographical report “Tears are not enough”, published in 2005 at the author’s own expense since no editor could be found.

Virtual site on DVD: “Sighet Memorial”
About the “Sighet Memorial” in Romania, a DVD can be obtained. The DVD shows the museum reconstructed in three dimensions, the visitor wanders through the virtual space without being obliged to visit the original site.
Krenn re-photographed both the virtual site of the museum and the scenes of the movie “Naked among wolves”. In his three-band audio and slide installation, the artist opposes photographs of the real sites to screenshots of the DVD, film stills of “Naked among wolves” and illustrations from the book “Tears are not enough”.
The questions and answers, spoken by actors, are based on his interviews with experts for the respective sites. Furthermore, Krenn has composed his own soundtrack for the slide installation, quoting music sequences from both the movie “Naked among wolves” and the interactive DVD of the Sighet Memorial.
The slide installation creates a new cinematic space consisting of stills, dialogues and musical take-offs. It is a discursive space in which the construction and transmission of history is transacted. The photograph in print media: An image from Ebensee.
An imprecise cellphone photograph shows a neo-nazi from Ebensee attacking survivors, together with other youths from the locality, during a commemoration ceremony in the caves of the former concentration Ebensee on May 9, 2009.
In the Austrian press, this photograph was reprinted dozens of times. Which function has such a photograph?
Which testimony does it bear? Which displacement of meaning does the photograph suffer from inscriptions and news titles?

In his video “An image from Ebensee”, Martin Krenn fades out all texts from the newsprint and films the photograph islated from the text. Thus he shows how position, format, cut and colour scheme of the original are changed by reproduction.
Krenn accompanies this by reading the publication date, newspaper title, title of the report and inscription of the respective image.