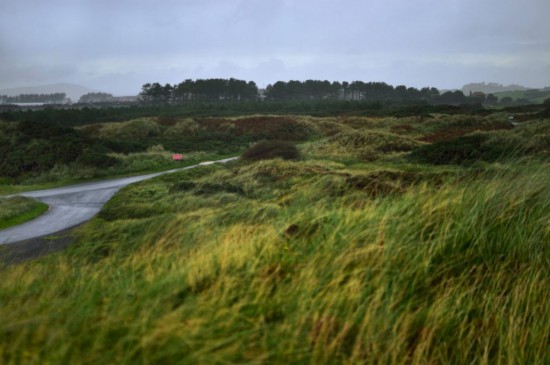 The photo exhibition “World´s End” focuses on a small Northern Irish village that is located within a typical Irish landscape setting off the rocky coast. The only difference from this idyllic picture is that the coastal area surrounding the village is a restricted area, and is occupied for more than 100 years by a British military base. Aerial and satelite photography is therefore prohibited. On internet services like Google Maps, the entire area and the village are nowhere to be seen. But the artist Martin Krenn was able to obtain a permit for his photographs of the site and buildings from the military base of the British army.
The artist who lives in Belfast and Vienna engages in his work on the interaction between historical and political phenomena and their documentation. He is particularly interested in the relationship between text and image, where historical events are retold through available documentation. Through the use of images the story of history is not only illustrated but interpreted and restaged. The pictures that are then reproduced are accompanied by a shift in importance. Eight large photographs determine the underlying issue of the exhibit. At first glance, they are innocuous photographs of landscapes and interiors. The caption of the photographs refer equally to the subject as well as the geographical and historical context, without referencing the work to certain scenes or historical events. Such as, the image of a distinctly covered coffee table is next to the painting of a modern battlefield. Likewise from a distance, a seal colony is observed hanging nearly invisible in the dense undergrowth just next to the uniformed soldiers. What they have altogether is a contradictory place, an apt metaphor to the title of “World´s End”.
The eponymous film shows images of the military base, the surrounding countryside, and the village. These are underpinned by a narrative that summarizes Krenn‘s talks with the protagonists of the film. As with the photographs as in the film, the laws of the documentary are undermined deliberately by both the place‘s names that remain anonymous, and the identities of the people that are kept vague. Due especially to the distance of the work from the genre of documentary, the exhibition shows that the history of a place is always composed of many overlapping stories. Martin Krenn adds them without any special weight, even including his personal history. The work therefore dissolves the boundary between fiction and reality, while evading a clear allocation. With regards to the facts of his painstaking research, he developed a method that allows him to approach the contentious history of this place of interest, without losing sight of its complexity and contradictions aside.

Caravan by The Forever Young Pensioners