An open letter to the operating authority of the Vienna Big Wheel, also published as a poster in Vienna on various locations:

„On your information website http://www.riesenrad.com under the menu item ‚History‘ the Nazi period and the ‚Aryanisation‘ of the Big Wheel is completely left out, which raises the following questions:

– In which year was the Big Wheel stolen from its owner Eduard Steiner and who profited from this?

– Who carries the responsibility for the fact that Eduard Steiner’s heirs had to fight court battles for five years in order for ownership of the Big Wheel to be returned to them?

– Why were the heirs, who were living in Prague, forced to sell the Big Wheel in 1964?

– Eduard Steiner was murdered in Auschwitz in 1944; for the official ‚Commemorative Year 2005‘ do you plan to mount a visible sign of remembrance at the Big Wheel in order to commemorate this murder?

– Will the information requested by me be available on your webpage?“ 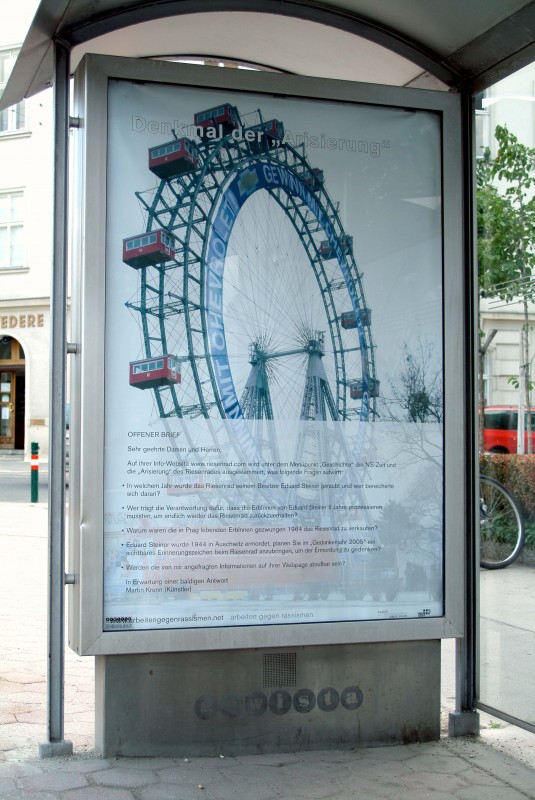 In 2005 I received an e-mail from the manager Mr.  Petritsch.

Peter Petritsch: „Dear Mr. Krenn, Thank you for your interest in the history of the Vienna Big Wheel. Your questions are best answered by the book ‚Das Riesenrad hat alle entzückt‘ (The Big Wheel Was a Joy to Everyone) by Vienna councillor Cécile Cordon, published in 1997 by Mandelbaumverlag. On pages 105 ff the Wheel’s development is described in detail beginning in 1934. We would be happy to send you a copy of the book if you could kindly supply us with your address.“

M. Krenn: „Dear Mr. Petritsch, I have read the book ‚Das Riesenrad hat alle entzückt‘ by Cécile Cordon. It answers important questions on the history of the Big Wheel.

The Big Wheel is not only a landmark of Vienna but also a memorial to ‚Aryanisation‘. The Nazi period and ‚Aryanisation‘, however, still continue to be completely left out. There is hardly an inhabitant or tourist in Vienna who knows about this part of the Big Wheel’s history. Do you intend to counter this by publishing the missing historical facts on your information website?

Peter Petritsch did not answer until today. 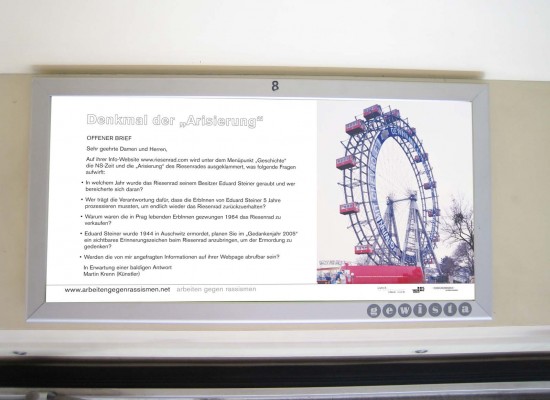 Draft for poster inside the public tram in Vienna, censored by the “Wiener Linien”, 2005