In cooperation with students from alternative and regular schools. 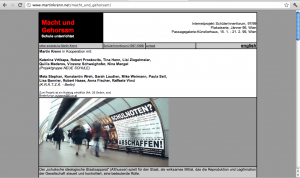 Power and Obedience
The „scholastic ideological state apparatus“ (Althusser) plays an important role for the state as an effective means of steering and controlling the reproduction and legitimization of society.

School discipline, military discipline and work discipline are deemed necessary for upholding the state and its society. Schools, like prisons and barracks, can be used by the state as a mechanism of domination and control in its attempt to impose its interests.

Following Foucault, however, power is not simply held but rather, it effects. Power is not bound to individuals or groups/institutions, it lies in the structure, in the organization of space and the structuring of time. Power does much more than merely censoring and negating; it is productive.

The project „Macht und Gehorsam“/“Power and Obedience“ attempts to investigate and question the ways that subordination and other mechanisms of domination and control in the school institution function by making public the pupil’s critique of the schools.

First I visited schools in Vienna, presented the project and led discussions with pupils and committed teachers. At the visits, the pupils were invited to take photos of their schools and write statements on postcards, which would then be published in addition to the statements sent over the Internet to the homepage „SchülerInnenforum.“

The concept for the video “AlternativschülerInnen interviewen Regel-SchülerInnen”/”Pupils from alternative schools interview regular school pupils” was developed with a group of young people from the “SchülerInnenschule – WUK,” an alternative school project in which I have actively participated for several years.

Visiting the schools and working on the video made it possible to come into contact with pupils who in their free time then took part in the design and exhibition of the posters.

After several working meetings, a core group with the name “Neue Schule was formed consisting of alternative and regular school pupils”. The choice of statements made by the pupils for the posters, the working out of the layout and the concept for the exhibition were discussed as a group. Numerous discussions about changes in the school system supplemented the strategic and conceptual considerations.

K.R.Ä.T.Z.Ä., a children’s rights group from Berlin, with whom I previously had e-mail contact only, visited Vienna and presented their documented activities, publications and their “little school house,” which points out the cramped situation in school classes.

ABOLISH GRADES!
1 = “very good” to 5 = “insufficient” – school grades are meant to judge the produced performance. On the certificate, however,  they give no explanation of the subject, the type or methods of  the work performed. That is insufficient. In a performance-based society, the pressure to receive good grades is overwhelming. That is threatening. The teacher’s position of power is strengthened and the hierarchy maintained. If pupils could study autonomously, then externally imposed constraints would be unnecessary. 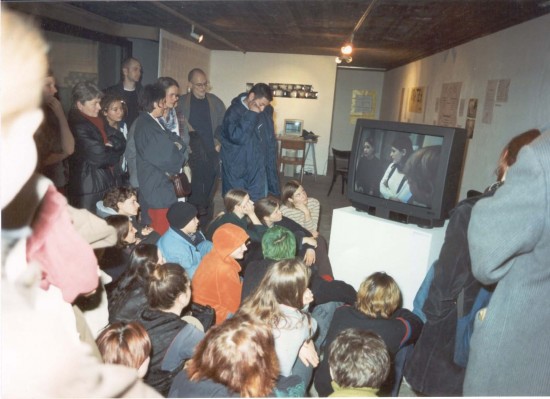 Comments
One cannot dismiss the poignant statements as the mind games of post-pubescent social utopianists. […] Still, authors and sponsors of a poster on abolishing grades would certainly not welcome treatment or even let themselves be operated on by a “doctor,” who has spent sixteen semesters at university and is still unable to show any positive examination results. And if they nonetheless want to risk it – lots of luck!
Mag. Helmut Jantschitsch (Head of the Federal section of the Austrian Upper School Union), AHS-union paper, Feb. 99

ABOLISH GRADES ?
School gave me loads of pleasure […] Even young people have to get used to the fact that their performance will be judged […] the grading system certainly has its weaknesses, but 80% of the pupils want to receive a grade for their performance.
Education Minister Elisabeth Gehrer, Journal Panorama on „Power and Obedience – school instructs“, (Austrian Broadcasting) ORF, Ö1, 9. 2. 99

SCHOOLED OBEDIENCE ?
In schools as they are now, we learn to subordinate ourselves to authorities. What I think is that young people should learn to be critical and question power. But wherever there’s a political system with someone in power, it is accepted, just like it is now in school where the principal is in power […]
Since we are graded, there can’t be open discussion; no pupil can afford to say what he/she really thinks.

SELF DETERMINED LEARNING ?
If pupils could just start getting together, instigating conversations with teachers and then drawing in their parents, I think that a great deal could be set in motion. […] But it’s hard to get conversation going in the first place, which still hasn’t happened and then it’s sometimes possible to get some teacher`s or another’s support, or parents, or even call somewhere in the ministry of education.
Dr. Christine Kisser (Ministry of Education), Live-Discussion on the exhibition, (Austrian Broadcasting) ORF, FM4, 18 January 99 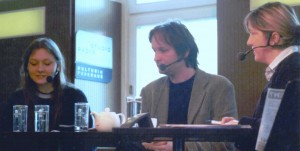