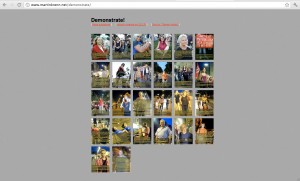 Ever since the FPÖ joined the coalition government, people have been gathering at Ballhausplatz in Vienna every Thursday and proceeding along various routes through the city in demonstrations against this government.

The government and some favoring media try to neglect the reasons for these demonstrations, contributing to a defamation and demonisation of the participants. A very impressive example of various media reports was the headline on the cover of the Austrian newspaper with the highest circulation (Kronenzeitung) on July 13, 2000: ”Every Thursday, hooligans march through Vienna: The demonstrations already cost us 82 millions.”

Seven months later, on February 22, 2001, during the Thursday demonstration on the occasion of the annual and very traditional, internationally frequented ball in the Viennese state opera, it became clear how Media coverage and the police’s use of violence can go together. The participants of the demonstration wanted to demonstrate against the government in front of the state opera and met an enormously big police force. If the police’s goal for the Thursday demonstrations has hitherto been to keep everything under control, to observe the participants and to consciously direct the protest, this time the situation was different.
Several memory reports of directly concerned people show that on this evening everyone could have been attacked by police forces. Everyone who participated in this demonstration, no matter if they were ready for violence, risked to be seriously hit with clubs, which made it necessary to call the ambulance. Whoever had to go to the hospital and indicated that he or she was hurt by the police, risked to be legally prosecuted because of “resistance against the state forces.”

One reason for all this is that mass media In Austria (especially the ”Kronen Zeitung”) regarded the demonstration participants as criminals. Such representations helped to establish and construct images in public of a ”leftist group ready for violence”, or ”a group of frustrated, but mainly peaceful Thursday demonstrators marching together with left-wing chaotic radicals”. In this context it Is not astonishing that the Austrian newspaper ”Die Presse” commented about the violence of this demonstration ”that this night ended with several seriously injured people, also hurt the peaceful demonstrators.”

The project ”Demonstrate!” tries to present a different view of the Thursday demonstrations through collaboration with some of the participants.
A series of 26 portraits, which was realized in the summer of 2000, approaches the phenomenon of these demonstrations not through a depiction of the masses, but with the intention to visualize subjective views of individuals within these demonstrations. Thus, a look at the protest from the outside should be avoided as well as a judgment in order to subsume everything under an ideological formula.
Some participants were asked directly and informed about the project. They were invited to give instructions on how they wanted to be photographically captured during the demonstration or at the meeting point, the Ballhausplatz. The pictures could be viewed immediately on the screen of the digital camera and then, the best picture was chosen together. Moreover, the photographed people were invited to give a statement on the political situation in Austria, which was instantly recorded on Mini disc or sent afterwards.
The photo series confronts visitors with pictures and attitudes of various people, who were also defamed as ”leftist radicals.” The portraits show their individual characters and, apart from mere protest, analyze the political situation as well as issues of a new social orientation with regard to the new government. 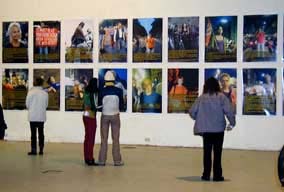 As a supplement to these photo and text prints, an information area informs about the police escalations on February 22, 2001; memory reports, which were provided by eyewitnesses for ”Demonstrate!,” showing police violence against the participants of the demonstration. The indication of any of the authors‘ names has consciously been left out.
One copy of the report on this Thursday demonstration and the following house search of the Ernst-Kirchweger house in the morning of February 23 offers information from the perspective of the inhabitants of this house, who were turned into violent criminals. Selected newspaper clippings make it possible to re-read how distorted the mass media reports on the Thursday demonstrations and the house search were.